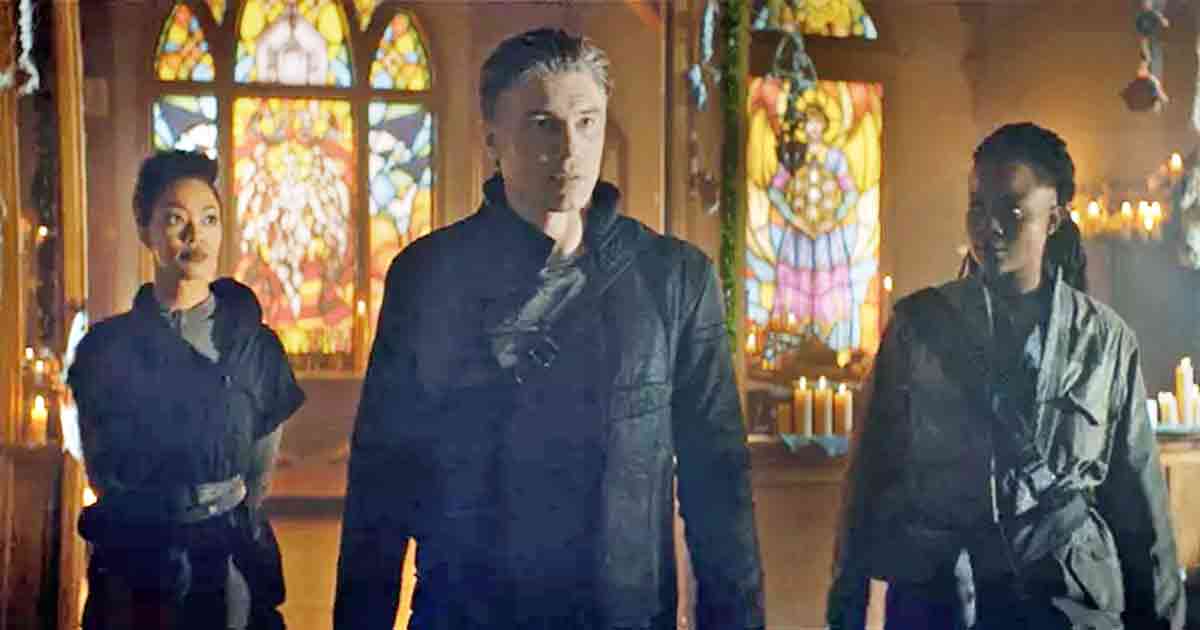 This week’s offering, “New Eden,” feels like a story severely hobbled by arbitrary time constraints. Conversations are truncated, introductions are brief or non-existent. However, even with a running time more than 15 minutes shorter than last week’s episode, the script does deliver on many levels.

In what I would call the “A” story, Discovery attempts to intercept a second red signal. This involves using the spore drive to jump to a location over 50,000 light years away, in the Beta Quadrant. When the ship arrives, the signal has once again disappeared. However, Discovery does find something at the location — an M-class (Earthlike) planet, surrounded by rings comprised of radioactive debris. Even more intriguing, the planet is inhabited by humans who have been on the planet 200 years, long before Earth discovered warp drive.

At this point, the viewer might begin to wonder if the signals are leading Discovery around the galaxy on some “Quantum Leap” type adventure. Captain Christopher Pike (Anson Mount), meeting with First Officer Saru and Commander MIchael Burnham (Doug Jones and Sonequa Martin-Green), wonders much the same thing. And thus begins an impromptu debate between science and faith.

Pike:
Why did that second signal want us to come here?

Burnham:
As science officer, I would advise restraint in ascribing motivation to what are now simply unidentifiable energy bursts.

Pike:
There are more things in heaven and Earth, Horatio…

Burnham:
I know my Shakespeare, Captain. Are you suggesting that some kind of divine intervention put those people on the planet?

But there appears to be more to Pike’s musings than he lets on. When the Captain learns that the “First Saved” were transported from Earth to the planet, which the inhabitants call Terralysium, he seems transfixed by their decision to combine all of Earth’s major religions into one doctrine. Later, even though he holds fast to his decision that General Order One (AKA, the Prime Directive) applies to Terralysium, meaning Starfleet cannot interfere with the natural development of the society, he beams down to the surface. Dressed in his Starfleet uniform, he speaks with Jacob (Andrew Moodie), a New Eden citizen whose family had always sought to learn the truth about the events surrounding the First Saved. Pike tells Jacob, “I lied, to protect the others from the truth. The truth is, you were right about us. I know what it’s like to live with doubt, and I guess I didn’t want that for you.” Pike hands Jacob a power source that allows the truth seeker to, once again, fill the town’s church with light.

Is the doubt Pike lives with something about his command? His relationships?  Or, perhaps, it is an internal conflict concerning science and faith? Earlier we learn that Pike’s father was a science teacher who also taught comparative religion. As Pike puts it, “It was a confusing household and we didn’t agree on a lot.” Did the debates in the Pike household mirror his conversations with Burnham?

In the episode’s “B” story, Ensign Sylvia Tilly (Mary Wiseman) is struggling to find a way to use the metrion-charged asteroid Discovery captured to develop an alternative interface for the spore drive. Lt. Commander Paul Stamets (Anthony Rapp) has confessed to her that he had previously seen his deceased partner, Dr. Hugh Culber, inside the mycelial network. The experience shook Stamets, who is now very reluctant to interface with the drive.

When Tilly slices off a piece of the asteroid, she is hit by a charge of unknown energy, knocking her unconscious. Later, in sickbay, Tilly is greeted by an unfamiliar woman in a Starfleet uniform. We later learn that the woman, May Ahern (Bshia Watson), was a junior high school classmate of Tilly’s. And Ahern died in 2252.

The fact that Stamets and Tilly have both seen manifestations of the departed should not be a surprise. At the end of season 1, we saw a small particle of spore material land on Tilly’s shoulder. It would seem that whatever connection is allowing Stamets access to another realm is also affecting Sylvia. Stamets tells Tilly, “Astromycology has taught me that nothing is ever really gone. Fungi are the universe’s recyclers. This is how termination begats creation. It’s why life is eternal. And my place is on this side of that cycle.”

The “manifestation” appeared to be pushing Tilly forward, acting as a catalyst to help the ensign realize how she can use the asteroid to save the planet. Whatever the entity’s purpose, it appeared genuinely delighted to observe Tilly’s unorthodox thought process.

Do the two main stories create a unified theme for this episode? Not quite. But they may yet intersect as the season progresses.

Elsewhere, this episode continued last week’s trend of letting secondary members of the bridge crew shine. Lieutenant Junior Grade Joann Owosekun (Oyin Oladejo) joined the landing party and showed that she is more than capable of improvising solutions to problems. We also learned that she was raised in a luddite collective. How she found her way to Starfleet could be an interesting story. Meanwhile, on the bridge, Lt. Keyla Detmer (Emily Coutts) demonstrated her outstanding piloting skills. Her “Donut” maneuver with Discovery was impressive.

Next episode: Point of Light

The inhabitants call their planet Terralysium. This is a reference to Elysium. In Greek mythology Elysium is the final resting place of the souls of heroes and those of great virtue. Those deemed worthy were conveyed there by the gods.  Could the name have been chosen by the settlers as a non-Christian way of saying a heavenly version of Earth (Terra)?

May (appearing as if from nowhere):
Can I help you with something?

Tilly:
Yes. Yes, thank you. I’m supposed to be on bed rest, but that is practically an affront to my very existence, ’cause the ship’s in high alert, the captain, Burnham, Owo, not to mention an entire planet might be nuked, and that is not happening! Why are you looking at me like that? You’re May, right? Am I talking too fast? I’m problem solving. I’ve had espressos.

Burnham:
You wanted to see me?

Burnham:
Fortunately for you, I was raised on Vulcan. We don’t do “funny.”

Pike laughs, then winces in pain.

Burnham:
Maybe I should just shut up.