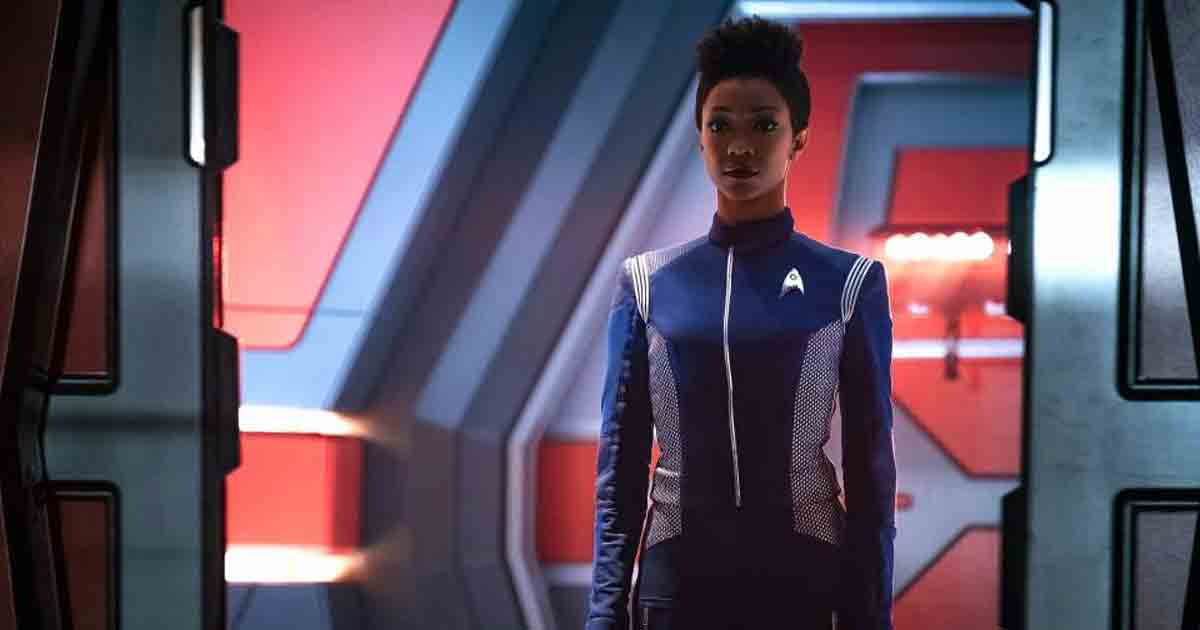 With “Brother,” we find ourselves off on a whole new set of adventures with the crew of U.S.S. Discovery. And there are a few “new” characters along for the ride as well. How does this premiere compare to last year’s opener, “The Vulcan Hello”? This episode appears to go by faster, even though it is a whopping 61 minutes, compared to the 43 minute run time of “Hello.” It is brighter, wittier and more accessible. It lights up every inch of the new cinematic 2:35 : 1 aspect ratio of the frame. But it does rely on a series of standard “sequel” setups that it has to work its way through.

One of the fastest ways to get a sequel rolling is to shake up the lives of the characters in the story. In some cases, that means the people we saw together are now far apart and someone has to “put the band back together.” Admiral Kirk had this task in “Star Trek: The Motion Picture.” He needed to reunite with McCoy, Spock and Enterprise itself.

Of course, the distance between does not have to be a physical one. It can be an an emotional chasm that needs to be crossed. At the beginning of “Jewel of the Nile,” Joan Wilder and Jack Coulton do not appear to be living the carefree life that was promised at the end of “Romancing the Stone.”

Another way to jumpstart the story is by having things not turn out as we assumed they would. For instance, at the beginning of “Ghostbusters II,” the guys are not living the life of fame and fortune we assumed they would. They find themselves performing at children’s birthday parties. Or what about Sarah Connor? After defeating the Terminator, she finds herself in a mental institution, believed to be insane. And wait, we thought Luke and friends defeated the evil empire in the original “Star Wars.” Sorry. “The Empire Strikes Back” nixes that assumption.

In the season two premiere of “Star Trek: Discovery,” all these challenges, and more, are brought into play. And it is the job of “Brother” to set all the wheels in motion.

For starters, Dr. Paul Stamets (Anthony Rapp) has decided to leave Discovery for a position at the Vulcan Science Academy. The ship is simply too full of painful memories. “Hugh is everywhere I look, Tilly,” Stamets tells Ensign Sylvia Tilly (Mary Wiseman). “How much am I supposed to take?” Then there is the issue of Spock, who, we learn, is not on board Enterprise. He has taken an extended leave. Pike is sad. Burnham is sad. Oh, no! Someone needs to get the band back together!

Speaking of our favorite Vulcan, the backstory about his childhood encounters with Michael Burnham (Sonequa Martin-Green) paints a picture of less-than-ideal sibling relationships within the house of Sarek and Amanda (James Frain, Mia Kirshner). Although we already knew that this was not the most fun-loving of households, the chasm between Burnham and her foster brother appears to be extremely wide. That needs mending.

And then there is the status of the ship itself. One might have assumed that Discovery would only be rendezvousing with Enterprise, or maybe going on a joint mission. Instead, we learn that Enterprise has experienced a sudden series of ship-wide systems failures and will be towed back for a full set of diagnostics. Captain Pike (Anson Mount) takes temporary command of Discovery to investigate one of a series of seven mysterious red bursts that have appeared in the galaxy.

As the episode ends, Captain Pike has donned a Discovery uniform, we have been properly introduced to the bridge crew for the first time, and Burnham is on a personal mission to save Spock. Looks like it’s time to book an arena tour. The group is getting together again!

The fortune Pike finds on the floor of Lorca’s ready room reads, “Not every cage is a prison, nor every loss eternal.” This seems too on point to be taken literally. As you may know, the character of Christopher Pike was in the original pilot of “Star Trek.” The episode was titled “The Cage.” And it was not a prison. Then there is the loss of Dr. Hugh Culber (Wilson Cruz). Is that the loss that will not be eternal?

The producers have mentioned that this season will touch on various matters, including religion. The so-called Red Angel appears to be a manifestation of this theme. It is noted that, unlike other iterations of Trek, this episode in particular was conspicuous in its use of dialog such as “I bless you, Michael,” and “Oh, thank Christ you guys are here.” Trek has had takes on religion in the past, in fact it was a major factor on “Deep Space Nine.” It will be interesting to see how this plays out.

There were a few scenes that appear to indicate all is not as it seems. For instance, Pike is genuinely confused by the way Enterprise experienced system-wide failures while attempting to investigate the red signals. Then there is the fact that, in the middle of a hectic situation, we specifically hear Pike ask Commander Jett Reno (Tig Notaro) if she knows anything about the signals. She says she knows nothing. I doubt that is true.

In the opening voiceover, Burnham recounts the ancient African story of the girl who stuck her hands into the wood ash and threw them into the sky to create the Milky Way. Burnham says that there was a message hidden there, among the stars. “An enormous letter in a bottle, made of space and time, visible only to those whose hearts were open enough to receive it.” I was able to track down the story, but could find no reference to this secret. You are welcome to read the story yourself and draw your own conclusions: The Girl of the Early Race, Who Made Stars